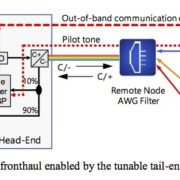 5G is anticipated to provide mobile data rates capable of supporting emerging applications, such as virtual reality (VR) and augmented reality (AR). This places increased bandwidth requirements on the optical fronthaul segment in the mobile network, which splits the radio processing functions between the baseband unit (BBU) and remote radio heads (RRHs). On the other hand, the fiber links are also becoming precious for most operators, especially in the dense urban area, because a dedicated duplex fiber pair is needed for each BBU-RRH connection in most existing networks. To scale the mobile network meeting the future growth, sufficiently low-cost and highly efficient optical fronthaul has to be considered.
Previously, we have proposed leveraging passive wavelength division multiplexing (WDM) to flexibly provision the optical fronthaul between the BBU and RRHs on a single trunk fiber to save fiber resources [1], where the fronthaul upstream and downstream are provided into two different wavelength regions (i.e. red and blue channels in the C-band). Moreover, tunable wavelength-agnostic tail-end transceivers can facilitate an auto-configuration of the optical layer and substantially reduce inventory sparing and operational efforts. The physical layer interfaces of such a WDM solution have been recently standardized in the ITU-T Recommendation G.698.4 (ex G.metro) [2].
However, the biggest challenge in rolling out a G.metro-based fronthaul system is still the feasibility of a tunable tail-end transceiver which has to be low-cost [3]. A significant amount of the overall tunable laser cost comes from the embedded wavelength locker (WL), which is attributed not only to the material cost but also largely to the assembly and calibration costs. A centralized wavelength control concept has been identified and also demonstrated to substitute the conventional WL [4]. Meanwhile, new tunable laser structures have been proposed to reduce the cost and complexity from the conventional external cavity laser or sampled grating-based approaches, among which the long-wavelength vertical cavity surface emitting laser (VCSEL) adding an actuator based on the micro-electro-mechanical system (MEMS) arises as a strong contender [5][6], thanks to its high-volume yield, low-cost fabrication and simple tuning mechanism.
In this paper, we investigate and demonstrate the remote wavelength tracking of a 10G-capable MEMS-VCSEL transmitter by utilizing a central WL. Due to the large chirp effect from direct modulation on the VCSEL, for the first time we characterize the laser drifting behavior at the central WL, and implement a pertinent tracking approach.

Assisted by the out-of-band communication (OOBC) interface specified in G.metro, the central WL is implemented at the head end, in order to set the tail-end wavelength to match the connected arrayed waveguide grating (AWG) filter port autonomously and to track the upstream wavelength at the same time. Consequently, each tail-end transceiver no longer needs a dedicated WL, instead, they can share such a centralized locker, as illustrated in Fig. 1. The control loop can be simplified as follows: (1) the central WL sends the sweeping command and assigns a unique pilot tone frequency (47.5 – 52.5 kHz, for each tail end) via the OOBC channel, which is superimposed onto the data payload by an external modulator; (2) once the connected tail-end transceiver receives the commands, it starts tuning the wavelength (without data modulation), and modulates the assigned pilot tone onto the optical light; (3) as soon as the central WL detects a particular pilot tone frequency (i.e. the channel label) reaching certain power threshold, it notifies the corresponding tail end to stop sweeping and begin the upstream transmission; (4) the pilot tone is then continuously superimposed onto the upstream data, such that the central WL can keep tracking the wavelength drift by monitoring the power deviation of the pilot tone; (5) the central WL sends the fine-tuning commands via the OOBC channel whenever the wavelength drifts away from the targeted grid.

We implemented the proposed central wavelength control to detect pilot tone labels from the 10% tapped optical upstream of all the tail ends, as shown in Fig. 2. The etalon WL features a 100-GHz free spectral range in the C- band. A built-in thermistor can be used to calibrate out any residual thermal effect on the wavelength accuracy. The 100-GHz spaced WDM frequencies as per G.694.1 are located at the half maximum of the rising slope of the filter response curve. The two detected electrical signals before and after the etalon filter are identically amplified, low- pass filtered, and converted to digital samples for the subsequent fast Fourier transform (FFT) processing. By calculating the amplitude ratio between the two branches for a particular pilot tone frequency, the micro-controller is able to identify any wavelength deviation. The parameters of analog-to-digital (A/D) sampling and FFT processing were systematically optimized, in order to distinguish two adjacent pilot tones (minimum 50 Hz spacing) with an adequate spectral resolution while minimizing the measurement error and computation complexity.

Since the pilot tone is a very low-frequency (~50 kHz) sinusoidal waveform directly modulated onto the VCSEL bias current at the tail end, it causes a strong adiabatic chirp, leading to a large-swing optical frequency modulation (FM) at the pilot tone frequency. Fig. 3 shows that the spectral excursion increases with the modulation index of the pilot tone. For instance, with a 10% modulation index, the bandwidth at -15 dB from the spectral peak is more than ±14 GHz from the nominal central frequency (i.e. 192 THz). The AWG filter converts the FM into the intensity modulation (IM). After the photo-detectors (PDs) in the WL, the IM resulting from the FM-IM conversion is superimposed onto the original pilot tone modulation, either constructively or destructively, depending on the spectral position in the filter. The etalon filter causes additional FM-IM conversion, as it has a narrow passband width with the locking frequency on the rising slope.

The proof-of-concept setup is depicted in Fig. 4. In the downstream, we use a MEMS-VCSEL transceiver with a fixed frequency at the head end. The OOBC commands tuning the tail-end transceiver are modulated on an ultra-fast variable optical attenuator (VOA). The inset eye diagram in Fig. 4 shows the superimposed OOBC signal on the level “1”. At the tail end we evaluate one tunable MEMS-VCSEL transceiver connected to the 193.2-THz filter port. After transmission over a 10 km single fiber spool and AWG filtering, the optical signal is detected by an APD receiver in the tail-end transceiver. The OOBC signal is sent to the micro-controller unit (MCU) for command decoding and control of the VCSEL, while the data payload is analyzed by a bit error rate tester (BERT), and the receiving sensitivity is -18 dBm at the BER of 10-12. In the upstream, the 10-Gbit/s data payload from a pattern generator (PG) and the pilot tone with 5% modulation index are combined to drive the VCSEL. The pilot tone at 50 kHz is internally generated by the D/A converter of the MCU.

At the central WL, the detected pilot tone is processed as discussed in the previous section. It can be clearly seen in Fig. 5 that the reference amplitude of the pilot tone changes when the VCSEL frequency is detuned from the central grid, because of the FM-IM conversion in the AWG filter. Nonetheless, we observed that the desired channel frequency is at the σ equal to approximately half the difference between the maximum and the minimum of the etalon/reference ratio. Once having scanned the whole channel and recorded both Pmax and Pmin, the control loop can track the deviation without ambiguity, because σ is still on a quasi-linear slope within ±10 GHz. By applying such a tracking algorithm in a long-term operation (~72 hours) for channel 193.1 THz, the central WL is able to track and stabilize the tail-end emitting frequency within a 3-GHz deviation, as shown in Fig. 6 in comparison with the free-running scenario. Further BER measurements also confirm that the 5% modulation index of the pilot tone induces less than 1 dB power penalty on the 10-Gbit/s upstream payload, as shown in Fig. 7.

Centralized wavelength control is essential to enable a passive port-agnostic WDM system and save the cost of a conventional wave locker. The tunable MEMS-VCSEL is also promising for further cost reduction. Although the pilot tone necessary in the system caused a large chirp on the directly modulated VCSEL, its wavelength can still be tracked by employing the proposed approach.

This work was supported by the European Union’s Horizon 2020 Research and Innovation Program under Grant Agreement No. 67551 (5G-XHaul) and No. 762057 (5G-PICTURE). The authors would also like to thank Chris Chase, Mike Huang and Robert Lucas at Bandwidth10 Ltd. for their technical support and fruitful discussions.