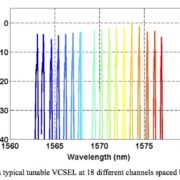 We demonstrate wavelength-tunable SFF transceivers operating at 1550 nm using a tunable VCSEL with a high contrast grating (HCG) as the output mirror. Tunable HCG VCSELs with a ~25 nm mechanical tuning range and over 2 mW output power were realized. Error-free operation of an optical link using directly-modulated tunable HCG VCSELs transmitting at 1.25 Gbps over 18 channels spaced by 100 GHz and transmitted over 20 km of single mode fiber is demonstrated, showing the suitability of the HCG tunable VCSEL as a low cost source for next generation DWDM communications systems in access networks and data centers.

Low cost tunable lasers are of high interest for the implementation of next generation access networks and data centers. The lack of a commercially available, low-cost tunable transceiver has been hindering the implementation of higher speed, WDM (wavelength division multiplexed) capable access networks. Both the NG-PON2 standard, which uses TWDM, and full WDM-PON approaches require low cost, colorless ONUs with tunable lasers [1–3]. In the longer term, data centers will also require low cost WDM sources for higher capacity links, as demand for higher speed, denser optical interconnects continues to grow. Tunable lasers are preferable to fixed wavelength lasers in WDM systems, since they have a lower cost of ownership as they allow a single laser to transmit on many channels, reducing the number of spares that need to be stocked and allowing for remote reconfiguration of a transceiver’s wavelength. Beyond this, tunable lasers add another layer of flexibility and reconfigurability to optical networks, enabling entirely new optical network system architectures.

VCSELs are the proven low-cost, energy-efficient, high-speed transceiver link technology on the market today. By integrating a MEMS-actuated mirror on top of a VCSEL, the wavelength of the VCSEL can be simply tuned by applying a single control voltage [4]. Tunable VCSELs have been demonstrated to achieve wavelength tuning ranges exceeding 100 nm [5,6]. VCSELs can also be directly modulated and tested on a wafer scale allowing for much lower cost sources than competing edge-emitting laser approaches [7]. There is a considerable challenge in achieving a high-speed directly- modulated tunable VCSEL though because the MEMS tuning mechanism is often hundreds of microns in size, while a high speed VCSEL structure requires a small structure on the order of 20-50 μm in order to have sufficiently low parasitic capacitance for the VCSEL to be directly-modulated at commercially relevant speeds, greater than 1 Gbps.

Using a high contrast grating (HCG) mirror [8,9] allows for a polarization-stable, long-wavelength VCSEL, which can be achieved with a simple, low cost epitaxy and fabrication process [10]. Fixed wavelength directly-modulated HCG VCSELs have been proven to achieve 10 Gbps transmission [11,12]. Wavelength-tunable HCG VCSELs have been demonstrated tuning over a >25 nm wavelength tuning range and at wavelength tuning speeds as fast as 30 ns [13,14]. A similar tunable structure can also be used to realize an integrated wavelength-tunable filter/high speed photodetector [15], also a critical technology in some colorless ONU approaches for WDM applications.
The high contrast grating is 10-20 times thinner than conventional DBR-based movable mirrors on VCSELs, thus is much more flexible and can be implemented with a much smaller MEMS footprint than conventional tunable VCSELs.

This allows for the footprint of the tuning mechanism to be ~10 μm, which then allows the VCSEL footprint to reach a size where parasitic capacitance is reduced enough that commercially relevant modulation speeds can be achieved.
Here we show a high speed, directly-modulated tunable HCG VCSEL-based tunable SFF transceiver transmitting over 20 km of fiber across 18 channels spaced by ~100 GHz operating at ~1560 nm. High-speed, fixed wavelength VCSELs are demonstrated operating at 10 Gbps over a 100 km dispersion-compensated fiber link. Higher speed tunable VCSELs with a S21 response exceeding 5 GHz have also been demonstrated. Prototype tunable VCSELs were used to demonstrate a 5 Gbps link over 10 channels (~7.2 nm). Additionally, preliminary wavelength stability study of the MEMS on the VCSEL has been performed, indicating less than 100 pm of wavelength shift through 185 billion cycles of the tuning mechanism.

The tunable VCSEL used in this experiment is similar to those previously demonstrated [10,12] with the addition of a ground-signal (GS) contact configuration for high-speed modulation. The contact pads were moved on top of a polyimide spacer layer to reduce parasitics due to the pads and the mesa and MEMS were optimized to fit in a much smaller area, further reducing the VCSEL’s overall capacitance. The tunable VCSEL is packaged into a TOSA (transmitter optical subassembly) package and integrated into a SFF transceiver. The optical spectrum at 18 different wavelength channels spaced by ~100 GHz for a typical device is shown in Fig. 1. At each channel, the VCSEL lases in a single mode with a side-mode suppression ratio (SMSR) exceeding 40 dB. The VCSEL can be tuned continuously across over 14 nm. The tuning range is limited by deflection of the top mirror in the current design, but has been demonstrated to have over 25 nm of wavelength tuning in alternative mirror designs and is expected to achieve greater than 40 nm tuning range with further optimization. The TOSA and SFF transceiver package includes optics and fixtures for coupling into single mode fiber with a standard LC fiber connector.

The tunable VCSEL within the transceiver module was directly modulated at each of the 18 channels at 1.25 Gbps (NRZ-OOK, PRBS = 27-1), and transmitted over 20 km of single mode fiber (SMF-28). All channels are detected with a standard 1.25 Gbps SFF transceiver with a variable attenuator immediately before it. No amplifier is used in line. Fig. 2 shows the error-free (BER<10-10) optical eye diagrams of the link after transmission through 20 km of fiber at several of the wavelengths.

Limiting the high-speed performance of the HCG VCSELs is their parasitic resistance and capacitance. Parasitic capacitance can be reduced by shrinking the mesa size of the VCSEL. With optimization of the mesa size and the addition of polyimide passivation around the mesa so that the contact pads could be moved onto a coplanar surface with a low dielectric constant material between the pad and substrate, we were able to achieve a high-speed fixed wavelength HCG-VCSEL with 2.2 mW peak output power and a 4.3 mA threshold current at room temperature. The small signal modulation response (S21) of the VCSEL is shown in Fig. 4 left). A -3 dB bandwidth of 7.8 GHz was obtained at a bias current of 2.4 X Ith. The fitted capacitance of the 40 μm mesa device was ~0.6 pF, and the measured resistance was 60 Ω, indicating a parasitic cutoff frequency of ~4.4 GHz. Thus, the device performance is still limited by parasitic capacitance, which could be further reduced by reducing the mesa size and minimization of electical resistance within the structure.
Fig. 4 right) shows the eye diagrams and BER curves of a directly-modulated (OOK, on-off-keyed) HCG-VCSEL both back-to-back (shown in blue) and over a dispresion compensated 100 km fiber link (shown in red). The device showed error-free operation (BER < 10-9) up to 10 Gb/s at 20 oC. The performance of the device was assessed using bit-error-rate (BER) measurements, both back-to-back (B2B) and after transmission through a link consisting of 80 km of SMF followed by 20 km of dispersion-compenstated-fiber (DCF) (Lucent DK-80). The BER after fiber transmission was slightly better than back-to-back, possibly resulting from the interaction of the device’s chirp with residual chromatic dispersion in the link.

Tunable VCSELs present an additional challenge in shrinking the device mesa because the MEMS actuators and a second tuning contact must also be fit onto the top of the mesa, as opposed to just the HCG and top laser contact in the fixed wavelength case. Tunable VCSELs were fabricated with polyimide passivation around the mesa as well, shrinking the mesa area and reducing the capacitance of the overall structure, though we were not able to achieve as small of an area as the fixed wavelength case due to the MEMS actuators and third contact.
The S21 response of a tunable VCSEL with reduced mesa size and polyimide is shown in Fig. 5, left. The -3 dB point of these VCSELs was 5.3 GHz at a bias current of 14 mA. Tunable VCSELs were used to create an optical link operating at 5 Gbps in a back-to-back configuration. Fig. 5 right) shows the bit error rate versus received power of the tunable VCSEL at various wavelengths across its tuning range. 5 Gbps error-free (BER<10-10) performance was achieved across a ~7.2 nm tuning range. A typical eye diagram from a tunable VCSEL operating at 5 Gbps is inset in Fig. 5, right). 10 Gbps performance of these tunable VCSELs is expected with further reduction of the device parasitics as well as an optimized input waveform.

An important question for MEMS tunable VCSELs is their reliability and stability under repeated tuning between channels. To test the mechanical stability, a tunable VCSEL was tested on a thermoelectric cooler held at constant temperature and drive current while being tuned between two channels spaced by ~1 nm. Periodically, the wavelength of one of the channels was measured. The measured wavelength is shown in Fig. 6 as a function of the number of tuning cycles. The VCSEL was tuned between the channels 185 billion times (this corresponds to tuning >50 million times per day for 10 years). Though the device was temperature controlled, there was a variation of 150 pm on a 24 hour cycle, presumably due to room temperature variation. After averaging this 24 hour cycle out, the lasing wavelength changed within a range of ~90 pm through the 185 billion cycles of tuning between the channels.

These tunable VCSELs were used to create a 5 Gbps link, which achieved error-free operation across 10 channels spanning 7.2 nm. The MEMS tuning mechanism of the VCSELs was shown to be stable to ~90 pm wavelength change after 185 billion tuning cycles. MEMS-tunable long-wavelength VCSELs are an exciting option for low cost WDM systems in access networks and data centers, especially colorless ONUs for NG-PON2 and WDM-PON systems.